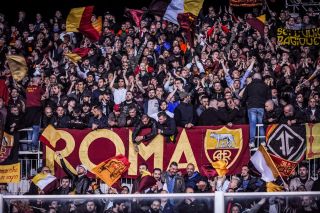 It’s 14 years since Manchester United tore AS Roma apart in the quarter-finals of the Champions League at Old Trafford and that defeat still hangs like a massive cloud over the Italian side as they prepare to return to the scene of one of their heaviest ever defeats for Thursday’s Europa League semi-final first-leg.

Under the tutelage (but not for much longer) of Portuguese coach Paolo Fonseca, the Giallorossi have undoubtedly saved their best performances for European football’s secondary competition this season – their league form hitting the buffers to an such an extent that their entry into next season’s Champions League will have to be by winning the Europa League.

Fonseca’s side has only won twice in their last eight Serie A outings leaving then floundering in seventh position as talk in the Italian capital turns to who will be the new man at the helm next term. The current favourite is former Napoli, Chelsea and Juventus boss Maurizio Sarri. Under fire Fonseca will point to a debilitating injury list as the primary factor as to why his side’s Champions League ambitions have fizzled away, but just like in every season at the Stadio Olimpico there has been club in-fighting, the highlight this term being Fonseca’s very public falling out with talismanic striker Edin Dzeko over a proposed move to Juventus in the January transfer window.

Young Italian midfield sensation Nicolo Zaniolo has been missing for most of the season with an ACL injury and has been a huge loss to Fonseca, who has had to juggle around his formation on a week to week basis as the infirmary continues filling up with casualties. One of the season’s shining lights – central defender Gianluca Mancini, will also be unavailable for the trip to Old Trafford after picking up a suspension in the quarter-final victory over Ajax. On the positive side, former United defender Chris Smalling is now fit and likely to return to three-man central defence alongside ex-Atalanta duo Roger Ibanez and Bryan Cristante.

Following in the footsteps of Francesco Totti and Daniele De Rossi, Roman born and youth team product Lorenzo Pellegrini will lead the midfield and skipper the side and is undoubtedly one of the danger men that United will need to keep quiet on Thursday. Another United old boy, Armenian international Henrikh Mkhitaryan, has had his best season in the Eternal City since his move from Arsenal in 2018, chipping in with nine Serie A goals so far this term, one behind top scorer Jordan Veretout who is the club’s nominated penalty taker.

Up front there is Dzeko of course – a big personality who thrives on the big occasion and if this is to be his last season at the club (which seems highly likely), he’ll be more determined than anyone to try to finally win a trophy for the city and the Roma tifosi, who have taken him to their hearts from the moment he stepped off the plane from England in 2015 after his move from Manchester City. The big Bosnian is currently third on Roma’s all-time scorers list with 117 with only club legend’s Roberto Pruzzo and Francesco Totti ahead of him.

The Curva Sud Ultras are set to give the team a royal send off from their training base at Trigoria on Wednesday, many of them having been present in Manchester on that dreadful night in 2007. The smart money of course will be on a United win and ultimately progression to the final in Gdansk on May 26, but the same people who witnessed the Old Trafford massacre 14 years ago, also witnessed Roma’s extraordinary Champions League quarter-final turnaround against Barcelona in 2018 (although with a different coach and a very different looking team) and it’s performances like that, that gives them hope that their side can upset the form book once again.