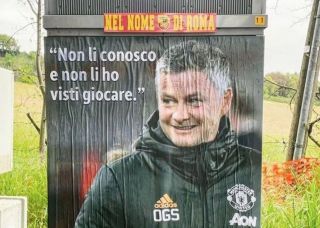 A banner has been hung outside AS Roma’s training ground, ahead of Thursday night’s game in the Europa League.

There’s an image of the Norwegian with the following quote attributed to him: “I don’t know them and I haven’t seen them play.”

The banner translates, as per @TuttoMercatoWeb on Twitter, as “Make sure he remembers us!”

It remains to be seen where Solskjaer actually said this, but Roma are a respected club in Italy who have had some fascinating players we’ve all enjoyed watching down the years.

But they’re still levels below Manchester United in terms of club stature.

Hopefully we do what we did to AC Milan in the previous round and knock them out.