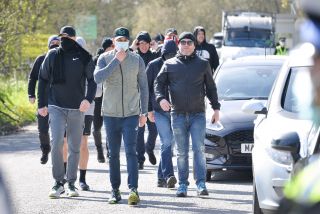 According to the Daily Mail, Manchester United have trebled the amount of security at Carrington training ground following a breach by fans last week.

The fans showed up unhappy with the European Super League announcement and accompanied by anti-Glazer banners.

The report claims that the security company employed by the club, Controlled Solutions Group, has three times as many people on duty at Carrington since last week’s event.

On top of that, they are carrying out more stringent checks on people lurking around the complex.

Has anyone got a Phil Jones suit?