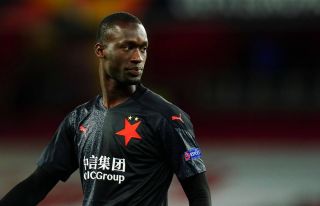 Sima, 21, scored four goals for Slavia Prague in the Europa League this season – including the winner as they beat Leicester City 2-0 – and has recorded 19 goals in 35 appearances this season.

With his contract at Slavia running until 2024, United have their work cut out if they want to sign him this summer, as an alternative to some of the bigger names being linked with a move to Old Trafford.

According to the Manchester Evening News, if Slavia cashed in on Sima this summer he would be eligible for a governing body endorsement. Players must have a GBE from the Football Association before they can play for a new English club.

Sima earned his first cap for Senegal against the Democratic Republic of Congo last month.

He’s been primarily played from the right-hand side for Slavia, with the view of him one day developing into a centre forward, which sounds very similar to our own Mason Greenwood.

United are trying to sign the highest-rated teenagers around the world – like they did with Amad Diallo and Facundo Pellistri last summer – because the players we would want aged between 23 and 28 are bound to cost a fortune.

The aim is clearly to identify these talents quicker.