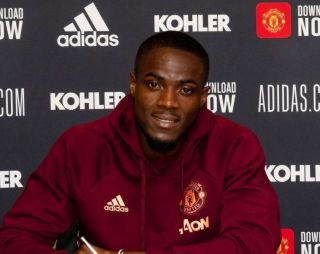 Eric Bailly has committed his future to Manchester United after signing a 3-year contract with the option of a further 12 months.

The 27-year-old Ivory Coast international will remain at Old Trafford, despite recent reports suggesting he was growing increasingly frustrated under Ole Gunnar Solskjaer over the lack of time he’d be getting on the pitch.

Last month, The Sun’s Martin Lipton wrote an article claiming “fed-up” Bailly was planning to snub a new contract at United – after being left out of the squad for a Europa League match against AC Milan.

His biggest problem, however, has been staying fit. There’s a brilliant defender in Bailly but he always seems to get injured – unless because he will throw himself into any old tackle.

Bailly told the club’s official website: “I’m very happy. This decision is something I didn’t have to think about.

“I love this club and I love playing for Manchester United. I’m happy and so are my family, everything is good.

“Now the moment with my injury has passed and I’m fit and feel good, and that’s it. A new contract is like a new challenge and I’m ready for this.”

Solskjaer was happy to have Bailly signed up to a new contract, but fans will still expect the manager to dip into the transfer market this summer. United need a top centre-back but Bailly is a very good option to have and we probably shouldn’t forget Victor Lindelof, who is currently ahead of the Ivorian in terms of team selection.

The manager said: “I am pleased that Eric has signed this new contract. He is still learning and improving all of the time under the coaches here.

“Eric has improved his robustness since my time as manager and he will continue to play a significant part in the squad.

“He possesses fantastic speed, timing of tackle and has that aggression which, of course, you need as a centre-back. He is a popular member of the squad and we look forward to continuing to work with him going forward.”