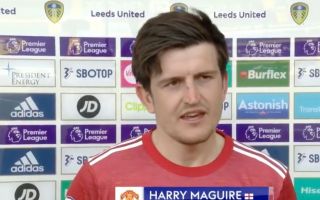 The Red Devils were held to a scoreless draw against rivals Leeds, in what was a scrappy game with a couple of meaty challenges, but ultimately it lacked quality especially in the final third.

Maguire put it down to a “tight and edgy game” but United are nowhere near clinical enough without Edinson Cavani on the pitch.

The skipper also spoke about the big week ahead for United in the semi-finals of the Europa League. Ole Gunnar Solskjaer will hope his players put in a better shift against AS Roma because they will be crashing out of the competition otherwise.

After watching his post-match interview, I’m not quite sure I agree with Maguire that United did enough to win the game. We had two good opportunities on goal from Marcus Rashford and Bruno Fernandes, but the intensity wasn’t there throughout the game despite what Maguire said post-match.

Ultimately, it was a very sloppy game of football.

🗣 "The tempo was there, the intensity was there."

Harry Maguire says Manchester United controlled the game but lacked quality to get the win pic.twitter.com/wVqyMfFVrt

Normally, Leeds are open and try their utmost to outscore their opponents, but today they tried to contain Solskjaer’s side and Solskjaer didn’t get the game he was expecting…