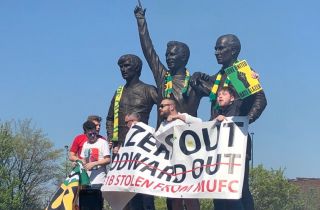 Ole Gunnar Solskjaer believes the Glazer family “have got a job on their hands” to rebuild trust with Manchester United fans after their giant wobble over the European Super League last week.

It’s worth noting that there has never been any trust between the fans and owners of Manchester United. Since their debt-ridden takeover they have never put a cent into the club, with their only came to gain financially from the crooked acquisition.

United co-chairman Joel Glazer had a big hand to play in the European Super League and his apology to fans – written earlier this week – has gone unaccepted, with fans protesting outside Old Trafford on Saturday.

There will be another protest at Old Trafford next week prior to United’s game against Liverpool and we’re expecting pressure to ramp up between now and the end of the season. Hopefully, it won’t stop there and fans carry it into next season – when we are all able to get back into the ground again.

Solskjaer insists these protests won’t impact the players and that he wants unity at all levels of the club.

“The players are professionals and they’re very good at playing football. That’s what the focus has to be on, play as well as we can and get the supporters on our side,” he said (via MEN).

“I think the owners of every club that signed up for this proposal have got a job on their hands, of course they have. We’ve had an apology from Joel and I think that’s important.

“He’s told us how committed he is to helping us going forward. Unity and everyone coming together and working together for one common goal is the best way forward.”