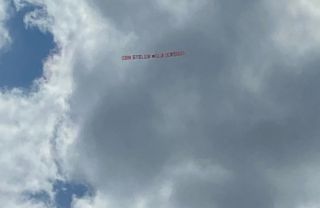 Manchester United take on Leeds at Elland Road in the Premier League looking to secure their place in next season’s Champions League.

The Red Devils are also 0n course to finish second in the league and a win against Leeds would put us in a very strong position to achieve that.

But fans have decided  to remind everyone about how unhappy they are with the current owners by organising a plane banner over Elland Road, as pictured by MEN reporter Samuel Luckhurst:

Manchester United fans continue their protests against the owners by flying a banner over Elland Road pic.twitter.com/sa82bpZDcl

Fans are invited to next week’s protest outside Old Trafford before the Reds take on Liverpool.

Details can be found here.