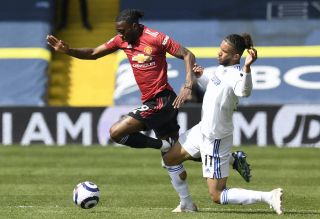 Refreshing confidence on the ball as he drifted forward on several occasions. Impregnable in defence as well. 7

In the wars with feisty Leeds and made clear what he thought of his below-par teammates. Used possession positively in advanced areas in first-half but didn’t have same joy after break. 7

Exceptional cross-field balls to Rashford were United’ most likely route to a goal before pause. Shook off a couple of shaky moments to keep another clean sheet on the road. 6

Constantly on the overlap and another solid defensive shift to end a week where he spoke out for the fans amid Super League fiasco. 7

Couldn’t replicate heroics of December’s game but stayed disciplined and matched the opposition’s aggression in the challenge. 6

Involved in tense exchange with Maguire as frustrations grew. The quality in the middle was shocking and the Brazilian was one of the protagonists. 5

Cut a frustrated figure as nothing went right. Confusion with James led to great chance being spurned and he fired United’s best chance of the second-half just wide. 5

Targeted and taken down and multiple occasions by Leeds players who were determined not to let him have same influence as reverse fixture. Lack of quality on the ball, though, and belatedly subbed for Pogba. 5

Always dangerous on the ball and remains United’s best option from the right. 6