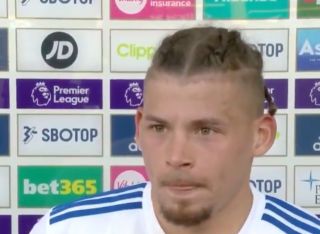 It was a game of few chances, but Manchester United arguably came closest to scoring in the first half when Marcus Rashford’s free-kick was saved by Illan Meslier.

The result means United are 10 points adrift of their rivals Man City in second place – while Leeds move up above Arsenal into ninth.

Leeds midfielder Kalvin Phillips spoke to Sky Sports after the match and felt happy with himself for managing to keep Bruno Fernandes quiet, however, we don’t believe that should be put down to the England international.

It makes it easier for teams to defend against a team that starts with two sitting players, right? Usually, a team like Leeds would play into our hands and push forward but they sat back and almost on top of Fernandes.

Listen to Phillips speak like he’s Roy Keane or something below, courtesy of Sky Sports:

🗣 "I really enjoyed it, having a battle in the midfield."