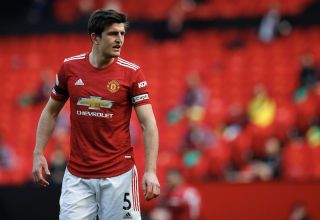 Since joining United from Leicester City back in 2019, the England international has featured in a whopping 103 matches, in all competitions.

Back in action earlier this afternoon against Leeds United in the Premier League, Maguire, once again lead the Red Devils’ backline.

Despite Sunday’s game ending in a drab 0-0 draw, a stunning stat has emerged just proves just how durable and important Maguire is to Ole Gunnar Solskjaer’s plans.

As per stat specialists OptaJoe, the United skipper has not missed a single minute in his side’s last 71 Premier League matches.

The stat, which shows Maguire has played well over 6,300 minutes of Premier League action for United since he joined, is quite remarkable.

The fact it has not been matched or bettered since the days of the great Gary Pallister, especially during the modern era of football, proves just how invaluable the defender is, both physically and mentally.