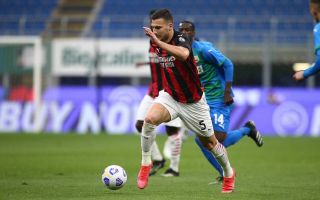 It remains to be seen whether Diogo Dalot has a future at Manchester United.

According to Diogo Dalot’s agent, the Portuguese defender will be playing for a major European club next season, with a return to Manchester United scheduled in the summer when his loan deal at AC Milan expires.

The full-back has spent the season on loan at AC Milan and has featured 27 times across all competitions. They are second in the Serie A, so from a United perspective we can be happy Dalot went away to gain first team experience at a high level.

According to the Daily Mail, Milan are yet to discuss terms with United over making the loan deal a permanent one, meaning Dalot is likely to return to England in the summer before making a decision on his future.

Dalot still has two years left on his contract, but his agent Carlos Goncalves is convinced his client will be playing at a high level next season.

“Diogo has a contract with Manchester United until 30 June 2023,” he told CalcioMercato.

“All decisions regarding his future will be made in due course. There is still a lot to be decided ibn the Italian league and Diogo is only focused on Milan’s immediate goals, which are to finish the 2020-21 season in the best possible way, earning a spot in the Champions League.

“But whatever the future, whatever decision is made, it’s guaranteed that Diogo will continue to play in a great European club.”

“In time we will have this conversation. There is still a lot to decide in Serie A,” he added.

“There is no need to speed up a process when all the parties involved have their attention on the matches that remain in the league, thinking about the best for Milan.”

Decent back up for Aaron Wan-Bissaka or will he move elsewhere in search of first team football?