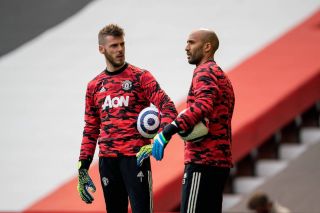 Lee Grant looks set to leave Manchester United at the end of the season.

Although he is arguably third-choice keeper as things stand, that wouldn’t be the case if Sergio Romero was still in the picture and now it looks like both will be leaving this summer.

According to the Daily Mail, United have denied Grant a one-year extension to his deal, which has left the goalkeeper upset.

The report claims that Grant believed he would be signing an extension, so it sounds like the club has done a U-turn.

This sets Grant up to leave on a Bosman this summer.

For someone who has been at the club for 3-years, during which he has made 2 appearances, I don’t understand why he’d be so upset. It sounds like the club were planning on a European Super League which has collapsed, so I wouldn’t be surprised if a lot of players left this season.

I suspect there will be a higher number of outgoings than incomings.