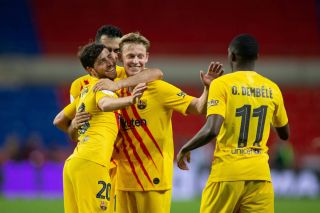 A right-winger is needed, there’s no question about it.

According to Spanish outlet SPORT, Barcelona are willing to accept between €50m-€60m for Ousmane Dembele as they now fear losing him on a Bosman.

The report outlines how Dembele’s contract with Barcelona is due to expire in 2022.

As you can imagine with Barcelona, a club shattering before our very eyes, they can’t afford to play the waiting game while the French winger decides on his future.

SPORT suggest Dembele will be transfer listed this summer and for a pretty reasonable fee.

The rumoured links to Manchester United never seem far away either, as per The Express.

But when you look at the team right now, it’s easy to see the lack of balance in attack because Ole Gunnar Solskjaer has not been able to settle on an option for the right flank.

Perhaps in the future we’ll see Amad make the role his own.