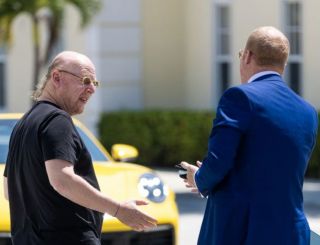 Not once in 17 years has any UK newspaper tracked down the Glazers like this.

Avram Glazer refused to apologies to supporters for his role in “pimping” out his club to the European Super League.

Although the ESL is history, The Mirror use words like “shabbily dressed”, “skulking” and “reclusive” in their strongly written report.

He was approached close to his £16m Palm Beach mansion a week after the ESL scandal broke.

The Mirror add that Avram Glazer was visiting a local drug store, so it wouldn’t surprise us if he had a headache after the ESL backfired on every single one of them.

Gary Neville made it clear this week that the Glazer family are not welcome in Manchester. The truth is, they never were and it’s time to get them out of our club.

“The Glazers have no place in Manchester anymore,” the former United captain said on Sky Sports.

"The Glazers have no place in Manchester anymore."@GNev2 believes the 'roots' of #MUFC's problems lie with the ownership. pic.twitter.com/eedqaoFXUZ

On Friday morning, Lord O’Neill and Sir Paul Marshall wrote an open letter to Joel Glazer about the need to make fundamental changes to the running of the club.