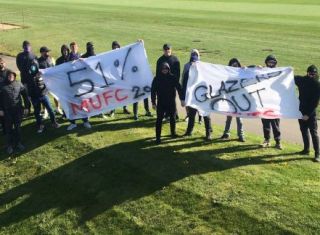 We decide when you play.

That’s the message coming from Manchester United fans who made their way to Carrington this morning.

According to Red Issue, the fans protesting blocked both entrances to the training facilities.

Red Issue also shared pictures of the protests via Twitter:

Our concerns over the Glazer ownership exist since 2005 but this could be a history defining moment for football fans across the UK.

However, shortly after news of the protest, BBC Sport reporter Simon Stone revealed Solskjaer and some of the coaching staff spoke to fans and calmed the situation.

It’s time to stand up. Maybe together — as much as many will hate the sound of that.