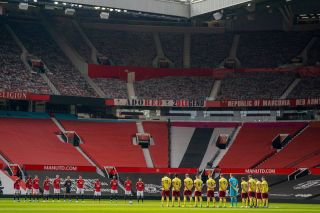 Manchester United are among the 12 reported European clubs to have signed up to the breakaway competition.

The European Club Association says it is “strongly opposed” to a European Super League after holding an emergency meeting.

According to the Mirror, former Manchester United goalkeeper Edwin van der Sar chaired the meeting in the absence of ECA president Andrea Agnelli, the Juventus chairman, who is leading the 12 clubs in their push for a new European Super League.

An ECA statement read: “In light of today’s reports on the subject of a so-called breakaway league, ECA as the body representing 246 leading clubs across Europe, reiterates its stated commitment to working on developing the UEFA club competitions (UCCs) model with UEFA for the cycle beginning 2024 and that a ‘closed super league model’ to which media articles refer would be strongly opposed by ECA.

“ECA would refer to the position adopted by its Executive Board at its meeting last Friday 16th April, namely that it supports a commitment to work with UEFA on a renewed structure for European Club Football as a whole post-2024.

“With ECA’s support, UEFA’s Executive Committee is being asked to endorse these commitments at its meeting on 19th April along with pursuing efforts to reach an agreement on the future relationship between ECA and UEFA.

“The ECA Executive Board will be convening over the coming days to take appropriate decisions in light of any further developments.”

Sir Alex Ferguson made his feelings heard by saying it would be an end to 70-years worth of European football.