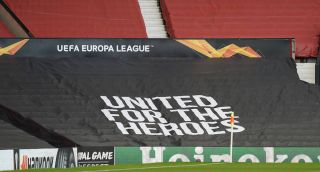 Manchester United are in a strong position to reach the Europa League semi-finals again as Granada travel to Old Trafford for the first time, trailing by two away goals.

The winners of the Europa League in 2016/17 and semi-finalists in 2019/20 look set to progress from the quarter-finals after goals from Marcus Rashford and Bruno Fernandes. It was the first time the two clubs met in a competitive fixture, with Granada enjoying their first ever European campaign this season.

Under manager Diego Martinez, Granada secured qualification for the Europa League by finishing 7th in La Liga last season, having achieved promotion just the season before. It’s been an incredible journey with their manager rated as the next big thing in Spain.

However, since dropping out of the Champions League earlier this season, defeats in their final two Group H games saw them finish in third place behind Paris Saint-Germain and RB Leipzig.

United have gone on to come through two Europa League ties, skipping past Spanish side Real Sociedad before a more challenging match-up against AC Milan.

On the other hand, Granada have enjoyed a remarkable run in the Europa League. It all started in the second qualifying round and they went on to finish runners-up to PSV Eindhoven in Group E. The Spanish outfit also eliminated Napoli in the round of 32, which was arguably one of their biggest ever results, and Molde in the round of 16.

In the previous meeting a week ago, United claimed only their fourth victory on Spanish soil, and to date we’ve won only nine of our 27 home matches against Spanish opposition. The plan is to make that 10 wins at home on Thursday night.

There’s still a lot of football to enjoy and today’s football betting tips will focus primarily on who will come out on top in the Champions League and Europa League quarter-finals. For United, it’s not about just reaching the semi-finals like they did a year ago. It’s about winning the Europa League outright.

Ole Gunnar Solskjaer needs to win a trophy and the Europa League, along with second place in the Premier League, would be seen as a good achievement as well as a sign of progress. Of course, it bodes well that United are unbeaten in their last 16 home games in Europe’s second rate competition (W12 D4) after winning five in a row before being held to draws against La Real and AC Milan. We’ve also been successful in all 19 UEFA ties in which we won the first leg away, as seen most recently in the round of 16.

It will be intriguing to see whether the manager starts with Marcus Rashford considering the amount of football he’s played this season. He’s also been playing through the pain barrier and I would be concerned about fielding a team – in any game – without the England forward and Bruno Fernandes.

The problem Solskjaer faces with both players is they want to play every game, every week. Rashford next appearance in UEFA club competition will be his 50th. Time will tell if Solskjaer decides to hold off on that milestone for this season’s Europa League semi-finals.

Granada’s top goalscorer comes in the shape of Roberto Soldado, who has experienced life in the Premier League (2 years – scoring 16 goals in 76 appearances) already with Tottenham Hotspur, and he will be aiming to do more against David de Gea this week. He scored in both legs of Granada’s round of 16 victory over Solskjaer’s former club Molde.

They’ve also got Brazilian winger Kenedy on a season-long loan from Chelsea, with three goals to his name from 27 appearances. Another mild threat we should be able to handle.
Although the Red Devils won the first leg, Solskjaer admitted it was not a “perfect night” as Harry Maguire, Luke Shaw and Scott McTominay were all booked and will miss the second leg through suspension as a result. It doesn’t change the fact United are favourites to win the tie and Europa League, but it might give the manager a selection headache.

Solskjaer said: “It was not a perfect night. We got three yellow cards and three suspensions [BUT] 2-0 is a very good result. We know how difficult it is to come to Spain. It’s created a good starting point for next week’s game – then we’ve got to play well to get a result. We want to win every game – football catches you so quickly if you rest. We can’t have any other approach. It’s still a young team, a learning team, and we have to improve all the time.”

Ultimately, it means that Solskjaer will have to make at least three changes to his side, with a number of fringe players set for the opportunity to make a lasting impression. Alex Telles will get the nod at left-back, Axel Tuanzebe should replace Harry Maguire and I think it would be good time to start Donny van de Beek in McTominay’s absence.

Daniel James, who we think will start on Thursday night, spoke after the first leg, saying: “It’s a massive win for us and getting a clean sheet was important. There’s still a second leg we’ve got to concentrate on but we have to recover.”

The winners of this tie will face either Roma or Ajax in the semi-final.

Paulo Fonseca’s Roma side are well placed to reach the last four after coming from behind to beat Ajax 2-1 in Amsterdam. They are the only Italian team left in European competition and I don’t think they are anything to worry about.

It makes for an interesting second leg because Ajax are undefeated on their last six visits to Italy (W3 D3), since losing 1-0 against Inter Milan in the Champions League (2005/06).

Interesting pre-match fact: Manchester United are the only club in this season’s quarter-finals to have won the Europa League.