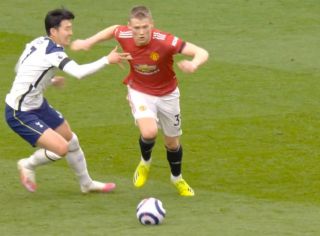 Manchester United fans were left seething after VAR chalked off a brilliant goal in the first-half of their Premier League fixture against Tottenham.

Ole Gunnar Solskjaer’s side thought that they had taken the lead ten minutes before half-time after a wonderful link up between Paul Pogba and Edinson Cavani.

Pogba fed Cavani with a sumptuous through pass and Cavani fired between Hugo Lloris’ legs to open the scoring.

But after VAR recommended referee Chris Kavanagh to check the pitch side monitor, the goal was disallowed for a foul from Scott McTominay on Heung-min Son in the build-up.

McTominay caught Son in the face while holding off the South Korean forward in an incident that appeared to be completely accidental.

The decision to disallow Cavani’s goal has caused outrage across social media, with many supporters furious.

United great Rio Ferdinand was clear in his verdict, tweeting ‘My tv is moments away from being on the patio in 100 pieces #var’.

It was an incredible call that has denied United from a crucial advantage against Jose Mourinho’s side in North London.

I genuinely don’t think I’ve been this angry since the Nani red card.

Didn’t call the Marcus foul.
Then wrongly called a foul on McT.

This game literally back to front because of incorrect decisions.

Didn't play well for the majority of the half but a disgraceful decision with a ref and VAR clueless between them. Top it off with awful defending to concede. Fuming 🤬

The ref’s had a shocker with that Son call. Hate to think what state this game will be in after another 45 minutes

That’s one of the worst ones. Utter madness.

Embarrassing. Spurs goal could have been chalked for a foul on Rashford in the build up and then Cavani goes in the book because Rodon chucked his toys.

READ MORE: Why Daniel James and Mason Greenwood are not starting for Man Utd vs Tottenham