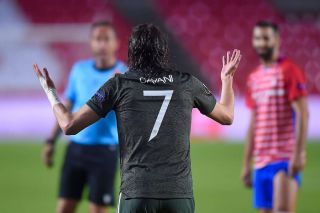 Edinson Cavani has seven goals to his name for Manchester United this season. Most will rightly argue that isn’t enough, but he has not played enough thanks to injury and being banned by the FA.

His father, Luis Cavani, sparked speculation about the striker’s future by dropping a hint he was unhappy living in England and wanted to move closer to home, as per Sky Sports.

The United striker took to social media shortly after those quotes from his father did the rounds to make it clear everyone knew what an honour it was to wear the Red shirt.

Ahead of our game against Tottenham on Sunday, the boss confirmed that Cavani hasn’t made up his mind on where he wishes to play next season.

I think we already know what it means if he doesn’t know whether he wants to play for United or Boca Juniors. That wouldn’t be a difficult question for a top player who wasn’t thinking about hanging up the boots.

“I’ve kept in touch with Edi and, of course, we keep an open dialogue,” Solskjaer said, as per ManUtd.com.

“He’s still unsure what he wants to do next season, which I find fine. It’s not been an easy year either for him, or the rest of the world this season, so he still wants time to make his mind up.

“I’m very sure that we will get a good Edinson for the rest of the season. He knows that this is the business end of the season, where we fight for the Europa League trophy and we can see the end-line in the league, only eight games left and you’re thinking about where you’re going to end up.

“He’s been so positive in and around the place, he’s been great to have, he’s been working hard now obviously to get fit. We’ve got him and now, hopefully, we can keep him fit the next six, seven weeks.”

On top of reports linking Cavani to Boca Juniors, ex-United defender Marcos Rojo claims he has been in touch with the striker about a move.