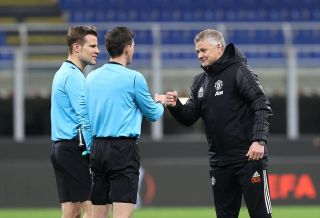 “I’m going to be successful here – and there are players here who won’t be part of that success. Many do have what it takes, others don’t.”

This quote came from the Manchester United manager on April 21, 2019 following a 4-0 drubbing at Everton (via AS). But on March 17 of this year, Solskjaer said: “Any cup competition can give you a trophy but sometimes it’s more of an ego thing for managers and clubs – ‘we’ve finally won something.”

Solskjaer: 'Any cup competition can give you a trophy but sometimes it's more of an ego thing for managers and clubs – we've finally won something… It's not like a trophy will say that we're back. It's the gradual progression and the consistency of being top of the league.'

So, how can one manager say two seemingly totally contradictory things? The answer is that the latter quote, which was seized on by both the media and critics of the United boss is taken out of context. Firstly, does anyone really believe that someone who spent ten years playing for Sir Alex Ferguson, sees trophies as unimportant? Solskjaer understands what trophies mean and don’t let anyone tell you he doesn’t want to win any. Secondly, that quote is just a snippet of much bigger interview in which the United boss talks about the importance of trophies overall but simply dismisses their use a measure of a club’s overall progress because of their knockout nature. In the same interview he said: “And sometimes in the cup tournaments you might be lucky, you might be unlucky, draws, different games decided by different factors. But we’re aiming to win, that’s why you play football, you always aim to win trophies.” Does that sound like a man who doesn’t want to win a trophy, or sees them as unimportant? It’s a man who understands that cups are subject to different factors and therefore are not always an accurate measure of progression.

If this is the case, then why did Solskjaer make that quote about trophies and ego? For this writer there are a few simple answers. Firstly, in a week with two huge cup games for his side Solskjaer was looking to ease the pressure on his players and get them to play the opposition rather than the occasion. Perhaps those comments, as much as the team selection contributed to the defeat at Leicester, or perhaps it was the extra freshness of the Leicester players. It’s also likely a veiled dig at clubs who see trophies as the only benchmark and quickly dismiss managers without looking at the overall picture. Perhaps there was even a dig at his predecessor who points to his time at the club as successful because he delivered two trophies, but who left the club in a toxic mess with player morale on the floor and fan anger heightened.

But I would go as far as to argue that not only does the United boss want to win a trophy, he needs to win a trophy. Not to keep his employers or the supporters happy, though of course that’s important, but to truly gauge the mentality of this group of players. I have already spoken in a previous article about the way the mentality of the squad has been altered for the better, winning a trophy is the next step in that. Solskjaer will know from, the man he still calls Boss that winning begets winning. The more you win, the more you want to hold onto that feeling. Winning that first trophy will tell the current boss exactly who has that kind of attitude. Which players remember the feeling and look at their medal and say, “I want more of this” and which, in the same situation, think “I’ve done it now, this is the pinnacle” or words to that effect. Ben Foster once said after winning the League Cup in 2009 (via ESPN): “I remember getting back on the coach after the game and it was basically, ‘Right, training tomorrow lads, we’ve got a Champions League match on the Tuesday’. It was all forgotten as soon as that. It was incredible. There was no celebrating, no kind of really revelling in it.”

Foster couldn’t understand that mentality and it’s a big factor as to why he never properly broke through at United (though he’s had a fine career nonetheless) but it speaks to the mentality requires for a United player and it’s this that Solskjaer is looking for and the only way to tell who truly has it is to win a trophy.

So, anyone who thinks Ole Gunnar Solskjaer doesn’t understand the importance of trophies or doesn’t care about winning them is either naïve or simply has an agenda against the United boss. Whether he can win one or not is a question he needs to answer quickly.

Read more: A homage to one of Manchester United’s all-time modern greats