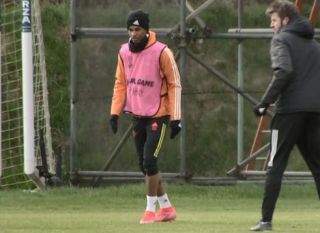 We are expecting to get team news after 1pm when Ole Gunnar Solskjaer sits down for a Q&A session with the media. The journalists will be looking for updates on players returning from injury, recent niggles and knocks, and whether the manager will field his strongest side against Granada.

It’s a relief to see Rashford training because it has been a difficult year for the player having to play through the pain barrier. Still, the England international has managed 19 goals for his club this season with plenty of important games to play.

Although this is Granada’s first year qualifying for European competition, they’ve reached the quarter-finals and we would be stupid to underestimate them.

Kudos to Press Association journalist Simon Peach who shared a picture of Rashford in training this morning.

Marcus Rashford trained with #MUFC this morning ahead of the #UEL quarter-final first leg in Granada. Ole Gunnar Solskjaer press conference coming up at 1pm pic.twitter.com/e53mLLMfrt