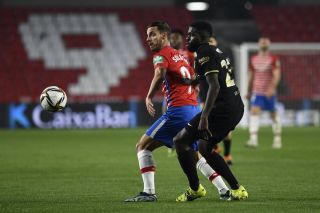 Granada host Manchester United in the Europa League quarter-finals this week, and their striker is a familiar face.

United fans will remember 35-year-old Roberto Soldado from his underwhelming stint at Tottenham, but he has netted 10 times for the La Liga outfit this season and will be gunning to cause problems for United’s centre-backs – likely to be Harry Maguire and Victor Lindelof.

Asked by respected Guardian journalist Sid Lowe if returning to Old Trafford without fans is a bit ‘so what’, Soldado responded: “No, Old Trafford is the leche, the business. But I tell you, I’d rather be there with 80,000 people.

“It’s an honour for us. It’s an honour to be in this competition. Europe is another dimension, everyone is watching – especially in a quarter-final against the team we’re playing. A historic club, known around the world. It’s historic for our city and our club. We might be the small team, ‘unknown’, but we have a big club’s ambition: that’s the mentality we need to knock out United. Our pressure is to leave everything out there. If that’s enough, brilliant. If not, fine, being here is a huge achievement. But there’s no doubt: the aim is to win.”

Soldado was recruited by Spurs in 2013 after Gareth Bale’s switch to Real Madrid.

During his time in London, the Spaniard scored just seven Premier League goals – in two seasons before being sold.

Juan Mata was Soldado’s team-mate at Valencia but after failing to settle at Spurs he joined Villarreal and played in the same side as United defender Eric Bailly. The Ivorian won’t be available for tomorrow night’s game after testing positive for COVID-19.

Soldado has played against United three times in his career – with Spurs and Valencia – losing twice and being on the winning side once, but he has never been on the scoreheet against the Reds.

When asked if he remembers that win with Spurs from 2013 on New Year’s Day, Soldado added: “It’s a hard one to forget! Because I had been home alone on New Year’s Eve.”

Read more: An homage to one of Manchester United’s all-time modern greats