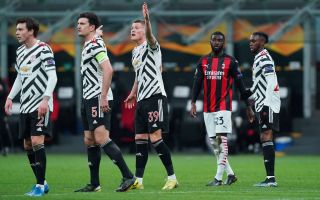 Manchester United have travelled to Spain for the first leg of their Europa League quarter-final tie against Granada on Thursday night.

The Reds passed their last 16 test against AC Milan but a side with very little experience in European competition stands in their way in the quarter-finals.

This is Granada’s first year in European competition and they’ve done extremely well under Diego Martinez to reach this stage. It’s no wonder that the 40-year-old is seen as one of the best up and coming managers in Spain.

The Spanish outfit currently sit ninth in La Liga and they knocked out Napoli in the round of 32.

It is vital that United don’t underestimate their opponents tomorrow night. Yes, we are the best side left in the tournament, but that counts for nothing if we don’t show up. Anything less than a victory from the first leg would be disappointing for Ole Gunnar Solskjaer’s side, with the Europa League being our last shot at a trophy this season. He will be out looking for revenge after his former club, Molde, suffered defeat against Granada in the last round.

Luis Milla is out of the clash but they’ve got Chelsea loanee Kenedy to keep an eye on.

Anthony Martial could miss the rest of the season after suffering a knee injury on international duty.

Solskjaer has brought Axel Tuanzebe to Spain, with Eric Bailly unavailable after testing positive for COVID-19.

David de Gea could start the remainder of United’s Europa League games after losing his place in the team to Dean Henderson.