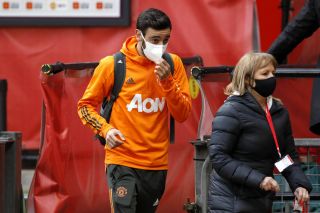 Bruno Fernandes has helped shift the mentality at Manchester United. His impact has lifted us to second in the Premier League but the team is still someway off challenging for the title.

The Portuguese talisman has told talkSPORT that Manchester United “want to win everything”, so someone really should make the Glazer family clear on the memo. It doesn’t seem like they are ever on the same page as the team, which desperately needs success.

“Of course we want to win trophies, we want to win everything we are included in. At the moment, we are not at that level this season,” Fernandes said.

“We are improving and this season is not finished and we have a lot to do until the end of the season. Until it is not mathematically possible, you have to believe so when I see it is not possible to catch City, I will forget the league.

“It’s never a success when you win just one trophy at this club. In the past we have won a lot of trophies. It is always successful when you win something because it means you have done something good but, at the same time, it doesn’t matter how many trophies you win, you always have to improve.

United have a chance to lift the Europa League for a second time this season — after beating AC Milan to reach the quarter-finals to face La Liga outfit Granada.

The Reds could also finish a place higher in the table. Ole Gunnar Solskjaer’s side came third in the Premier League last season and currently sit four points clear of Leicester City in second place.

Maybe with a few more top signings we could push City but catching them will also require greater consistency. There has been over a handful of games this season where United dropped points in games they could’ve won. We drew too many games last season and should be aiming for a winning run between now and the end of the season.