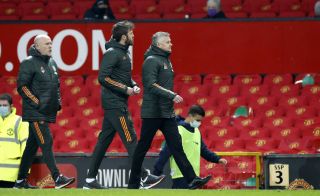 Reports suggest Ole Gunnar Solskjaer let off some ‘fireworks’ at half-time as Manchester United trailed Brighton 1-0 before going on to win the match 2-1.

According to the Manchester Evening News, Solskjaer directed his ire at Luke Shaw, who has been faultless in recent months. Then Bruno Fernandes supposedly had some choice words for the manager.

In his interview with the broadcasters, Solskjaer said: “Sometimes after international breaks it takes time, and then maybe the fireworks have to be lit at half-time.”

During his post-match debrief via Zoom, Solskjaer added: “Hairdryer? Sometimes you just have to raiuse your voice, sometimes you keep calm and composed, it doesn’t really matter what I did today, what matters is that we got to half-time to talk things through.

“Sometimes it’s louder than other times. Sometimes you can actually get your message across and speak slowly and not so loud. It doesn’t matter what I did today.”

A lot of people are fooled by the baby face of old – but I have no doubt in my mind that he can hand out a rollocking if one is required.

Dropping points yesterday would have been a real kick in the teeth. Especially Leicester dropped three points against City at the weekend.

Goals from Marcus Rashford and Mason Greenwood saw United come from behind to move 4 points clear in second.