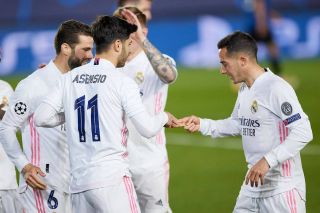 We brought you a report last week about Vazquez being offered a new deal at Real Madrid, however, given the Spanish club’s desire to reduce their wage bull, the 29-year-old has been asked to take a 10% pay cut.

Now Spanish outlet Defensa Central (cited via Daily Star) have reported that United will be paying close attention to Liverpool’s Champions League clash against Real Madrid – because of their apparent interest in Vazquez.

Going into the transfer window, it looks like United will be prioritising a centre-back and centre-forward – but that does not seem to have stopped them considering a move for Vazquez.

The versatile Spaniard has been playing this season on the right wing and it sounds like Madrid want him to commit his long-term future to the club.

Other reports from AS have claimed that the winger, who has featured in Madrid’s team since 2015, is already in ‘advanced talks’ with Bayern Munich over a move this summer.

Hansi Flick’s side are reportedly working to deal a deal as quickly as possible to make use of the player’s versatility since he can player at right-back as well as a more advanced attacking role further down the flank.

Madrid boss Zinedine Zidane has used Vazquez at both right back and right wing.