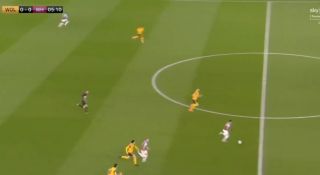 Jesse Lingard looks rejuvenated on loan at West Ham and he’s continued his brilliant form by scoring a cracking goal against Wolves.

With six minutes on the clock, Lingard ran from inside his own half to give the Hammers an early lead at Molineux.

It looks terrible from a defensive point of view, but Lingard did superbly to find space in the final third and he burst into a defence splitting sprint.

You 𝒏𝒆𝒆𝒅 to watch this.

Jesse Lingard runs from inside his own half to score a stunning opener for West Ham!

Solo goal of the season?

The Manchester United midfielder also played a hand in West Ham’s second goal with a delicate flick, and now they look set to finish the game in fourth place as the race for a European spot heats up.

While I hate seeing us sit behind City, it doesn’t look like United will find themselves scrapping for that final Champions League place like last season, even though we ended up 3rd.