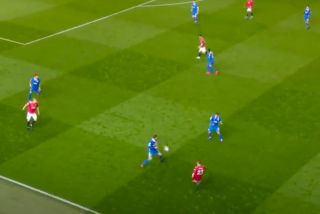 Greenwood’s headed home late on to consolidate United’s place in second by four points after a lacklustre showing for large periods against Graham Potter’s men.

United fell behind at the break after ex-academy graduate Danny Welbeck pounced on a rebound early on after a good save from Dean Henderson.

Greenwood’s performances this season have not been reflected in his goal tally but he was United’s brightest attacker and his efforts warranted his instinctive winner.

It came after Paul Pogba’s scuffed volley inadvertently fell to the teenager, but Arsenal legend Wright focused on two other important moments in the build-up to the goal.

Shaw, who Wright insisted was man-of-the-match, played a delightful ball in between the lines to Bruno Fernandes and Van de Beek drew Brighton defenders with clever movement.

“I thought Brighton were very good for their lead. But in the end the quality came through. This is brilliant from Donny van de Beek [in the build-up to United’s winner] and this is what he’s about.

“He’s come from a possession-based academy, that’s what he does. He makes movement. It’s great movement and leaves the space open to Bruno Fernandes.

“It’s a great ball too from Luke Shaw who, for me, was easily the Man of the Match for Manchester United. So in the end, United’s quality came through.”