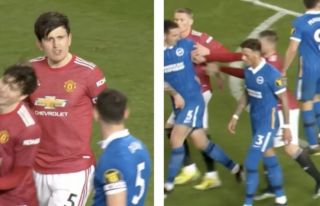 After falling behind to an early Danny Welbeck opener, United fought back well to take control of proceedings during the second-half.

With the match entering it’s final stages, despite eventually ending 2-1 to United, skippers Maguire and Dunk were spotted exchanging a few unpleasantries, but not before Luke Shaw stepped in to gently nudge the Brighton man out of the way.

England’s left-back was clearly not in the mood for any handbags.