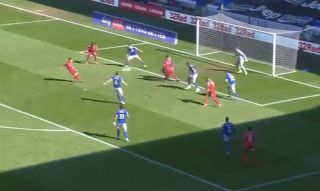 Mason Greenwood has singled out Manchester United loanee James Garner for his match-winning performance for Nottingham Forest against Cardiff.

Garner scored the game’s only goal when he converted Cyrus Christie’s low cross.

It sounds like he is having quite the impact at Forest, despite spending the first half of the season on loan at Watford where he rarely played – defeating the purpose on a loan move.

His form hasn’t gone unnoticed by Greenwood. The first-team star took to Twitter to give his assessment, which we think lots of Forest fans will agree with…

It’s good to see the first-team lads keep track of how the loanee players are getting on, and Greenwood would have played in youth teams with Garner so they’re already close friends.

James Garner with his second professional goal in a season which just keeps on getting better and better.#NFFC #MUFC pic.twitter.com/XsZi4EIpiX

I’m excited about the impact Garner is having at Forest because reading about his time at Watford was disappointing.