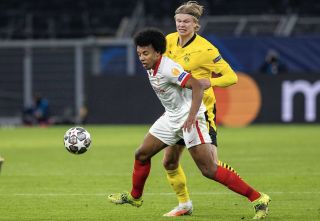 Since arriving in La Liga, Kounde has grown to become one of the country’s most highly-rated defenders.

After featuring in 79 matches for Sevilla, in all competitions, the 22-year-old has formed a formidable partnership with the likes of Diego Carlos.

In light of the young defender’s continued and impressive form, Kounde has seen his name linked with a big move, most notably, to join up with Ole Gunnar Solskjaer at United.

Originally, it was reported that although United were keen on the Frenchman, they were unwilling to meet his eye-watering £68m release clause.

However, just last month, new reports emerged which suggested that due to financial issues caused by the COVID-19 pandemic, Sevilla had dropped their valuation to £50m, as per The Sun.

Well the latest in the curious case of Kounde comes from Spanish outlet AS (as relayed by The Sun), who claim that due to Sevilla’s lower valuation, Real Madrid are now interested, as well.

It has been claimed that should Bayern Munich’s David Alaba reject the chance to join Los Blancos, Zidane could very well turn his attention to Kounde as the ideal alternative.