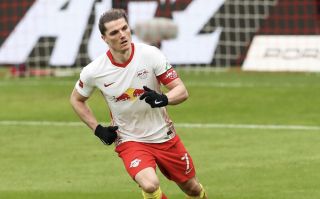 RB Leipzig midfielder Marcel Sabitzer has weighed-in on the speculation surrounding his long-term future in Germany.

Despite being his side’s captain, Sabitzer, whose contract expires next summer, has seen his name linked, relentlessly, with a move to the Premier League.

After continually being linked with a move to join Jose Mourinho at Tottenham Hotspur, the latest club to be mentioned in the race to sign the Austrian is Ole Gunnar Solskjaer’s Red Devils.

According to Bild (via Get German Football News), the midfielder is keen to leave RB Leipzig which could prompt a host of clubs to bid for his services.

Despite the audacious claims – the latest in the ongoing saga comes directly from the player, who has actually addressed the speculation surrounding his future.

Speaking to Kicker (via Sports Witness), Sabitzer was asked if he would prefer to play for ‘traditional clubs like Bayern Munich, Real Madrid, Liverpool or Manchester United?’ – Answering the question, Sabitzer said: “I can imagine it a lot.”

Going on to address his recent position change which has seen him transition from an offensive midfielder to a more defensive one, the Austrian said:“I enjoyed the position. The new position also changed my game again.

“In the centre, you will receive the ball more and you have to make faster decisions.

“However, I still have the urge to create something offensively.”

Do you think a new-found defensive Sabitzer could the key to United’s midfield problems? – Let us know in the comments.