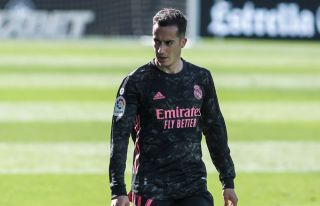 Manchester United have been handed a timely boost in their pursuit for Real Madrid’s Lucas Vazquez.

After forcing his way through the club’s youth ranks and following a successful loan spell with Espanyol, Vazquez has gone on to nail down a place in Zinedine Zidane’s first-team.

Despite featuring 31 times already this season, with his contract set to expire in the summer, there are growing concerns the experienced Spaniard could move on.

It has been reported by Sport (via Sports Witness) that Vazquez has been offered a new deal, however, given Real Madrid’s desire to reduce their wage bill, the 29-year-old has been asked to take a 10% pay cut.

According to these reports, Vazquez feels he is worth more than what is being offered and has therefore decided to reject his employer’s offer.

In addition to the player’s contractual situation, Vazquez would prefer to play as a right-winger rather than a right-back – a position Zidane often deploys him in.

The outlet conclude by saying that alongside Manchester United are three other Premier League clubs, as well as Bundesliga giants Bayern Munich, all chasing the 29-year-old.