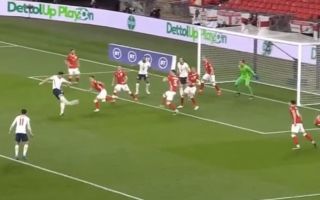 England left it late at Wembley against Poland.

We are happy to announce it was Manchester United captain Harry Maguire who smashed the ball into the net to give the Three Lions three points in their bid to qualify for next summer’s World Cup in Qatar.

Gareth Southgate saw his side go into the final 10 minutes with the scoreline at 1-1, and no way would he have thought a winner would come from Maguire.

But despite a crushing blow with Poland equalising, thanks to an error from John Stones, England kept their heads up.

Maguire popped up with 5 minutes left on the clock to smash home a strike after Stones redeemed himself with an assist.

Footage below courtesy of ESPN:

What a finish from Harry Maguire! 🔥

You could see just how much it meant to Maguire as he celebrated, but more importantly I hope he does it against Brighton at the weekend.

England remain top of their qualifying group on nine-points, with Hungary two points adrift in second.