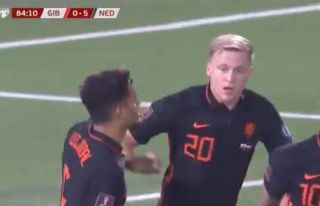 Donny van de Beek has scored for the Netherlands during their hammering of Gibraltar this evening.

There’s no denying that Van de Beek has endured a difficult first campaign at Old Trafford, after joining from Ajax in the summer, but we shouldn’t give up hope just yet.

It can take players time to adapt to the Premier League and being brutally honest, the argument that he should play more seems to quench every time he plays. People need to have a long hard look at the league table before making their mind up on that one.

Van de Beek didn’t start for the Netherlands tonight. He came on as a substitute and managed to get on the scoresheet.