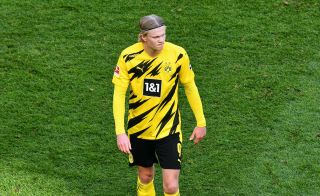 Mino Raiola has suggested that he was maybe too cautious about Erling Haaland joining a bigger club amid transfer links to Manchester United (via talkSPORT) a year ago.

The Norway international joined Borussia Dortmund when then was an array of clubs interested in his signature. He showed early signs of promise at Molde but took it to the next level after joining Red Bull Salzburg. Now, as a BVB player, he is one of the most sought-after players in the world.

Dortmund have become a great stepping stone club for young players – including Jadon Sancho and Haaland, with both players destined for big moves in the next year or two. The English winger was a target for Ole Gunnar Solskjaer last year, as per Sky Sports, but I have yet to see any signs that United will go back in for him this summer.

Haaland’s agent now admits that he might have been too careful, however, as Haaland has ended up developing quicker than most expected.

Raiola doesn’t name ‘Manchester United’ in the quotes below, but we think it’s clear we are one of the clubs he refers to.

“With Haaland, everybody was wrong,” Raiola told The Athletic. “He did things much quicker than everybody imagined.

“Haaland is in front of his own development. He is ahead of his own schedule.

“Maybe I was too careful when I said, ‘Oh no, let’s move to Dortmund instead of I-don’t-know-where’.

“This boy – I’m 100 per cent convinced and everybody’s convinced – can move to any club, wherever he wants, already on this level. And he could have done that last year.

“But maybe last year there was still teams (saying), ‘Oh, he was in Red Bull, can he do it in another club?’ He is quicker than his own prediction.

“So yeah, Haaland is the talk of the town.”

I don’t think these comments will go down well with Borussia Dortmund fans.