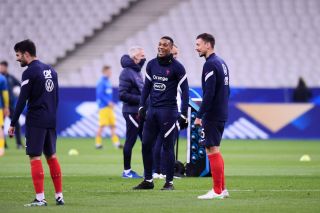 France boss Didier Deschamps was full of praise for Manchester United star Anthony Martial for his part in their 2-0 win over Kazakhstan.

The Manchester United forward set up Ousmane Dembele for the opening goal in Nur-Sultan but took a knock in the second-half before being replaced by PSG’s Kylian Mbappe.

Deschamps told reports after the match (via MEN): “Anthony was behind the opening goal. It’s good for them both [Martial and Dembele]. They did some interesting things.

“From the moment I selected them, they are in the squad to be used. I have other attackers in this squad. But for the profile of the opponent, it was important to commit opponents and to dribble. They both did it pretty well.”

Martial hasn’t received a lot of praise this season because it’s been arguably his worst in a United shirt. Last season it looked like he had improved in front of goal but has gone backwards since.

Hopefully the knock he sustained is nothing serious so that Martial can build on this assist when he returns to his club. United still have a lot to play for with second place in the league up for grabs, as well as the Europa League.

A strong finish to the season should see Martial on the plane for France’s European Championships campaign this summer.

The World Champions will be among the favourites to win the tournament outright and Martial won’t want to miss out this time.