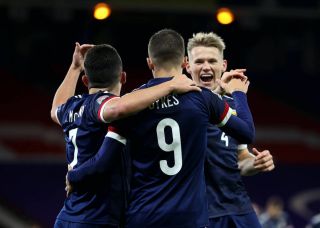 Scott McTominay has said he is “desperate” to get his hands on a first trophy with Manchester United.

The 24-year-old is currently on international duty with Scotland and has yet to win any silverware at Old Trafford.

He came close towards the end of the 2017/18 season when Chelsea beat us in the FA Cup final.

After crashing out of the FA Cup prior to the international break, United only have the Europa League to win this season.

“Obviously the rest, the league and the way we are wanting to progress in that, will hopefully follow suit in due course. I feel like we are building towards a really good team.

“And with international football, we want to go to the World Cup. There are plenty of things that I’m really looking forward to – it’s a pleasure for both Man United and Scotland.”

It’s about to be an exciting summer for Scotland after qualifying for the European Championships. The tournament was postponed last year but hopefully restrictions will be lifted by then and we can all enjoy the football with a pint.

Scotland also got their Qatar 2022 qualifying campaign off to a flying start – drawing with Austria ahead of games against Israel and the Faroe Islands.

McTominay added: “I feel like it’s been reiterated from the manager and the players, just having self-confidence and a bit more arrogance in the way that we approach games – knowing that we have got very, very good players who play at the highest level and who can more than match teams, and go and dominate as well.

“For us, that has to be the benchmark. That has to be the minimum when we are going into matches. Whoever we are playing against, I’m certainly not worried – so if the confidence is around the players, then we can do and do it.”

We would like to wish McTominay and Scotland all the best for the rest of the qualification phase.