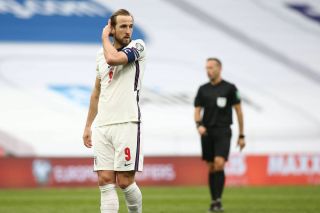 The England captain has regularly been linked with a move away from Spurs, where he is yet to win silverware despite being recognised for years as one of the world’s leading strikers.

United could be in the market for a new centre forward this season, and most fans right now will surely want Borussia Dortmund’s Erling Haaland to be that signing.

Kane is also bound to cost a lot of money and will be difficult to take from Daniel Levy’s mittens – due to his current deal standing until June 2024.

After watching Kane score for England in their 2-0 World Cup qualifying win over Albania on Sunday, Keane discussed the striker’s future via ITV Sport.

He said (via MEN): “He’s a professional. If you’re a top player you want to win trophies. It’s a big few months coming up for Tottenham, the League Cup final [against Man City], can they get in the top four? Huge question marks.

“Will that influence him? He’s obviously under contract, Tottenham will have a lot to say about it.

“But if you’re in his shoes and it comes to the summer, I think the guy has to move on to really win the big prizes. He’s not going to do it at Tottenham.”

Kane would make a huge difference to United, if we were able to get a deal done in the summer. We could wave goodbye to Edinson Cavani who reportedly wants to return to South America and there’s no denying that the Spurs strike would be a massive upgrade on Anthony Martial.

Read more: Manchester United should be on alert with Harry Kane unsure of his future at Tottenham