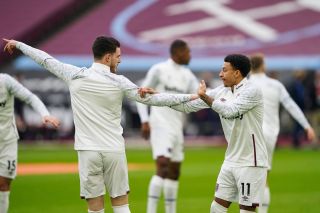 Declan Rice tells Football Focus that he warned the West Ham players and coaches ‘you will see’ just how good Jesse Lingard is before he joined the club from Manchester United in January.

West Ham’s defensive midfielder also shared that the lads were ‘blown away’ by Lingard in his first training session with the Hammers.

Six months ago, Lingard was nowhere near the Manchester United team and watching games from home. Since then he has earned a loan move to West Ham and an England recall ahead of the European Championships.

Rice has seen the big turnaround first hand and has shared why he thinks Lingard is so good.

“I am delighted for him,” said Rice, as quoted by HITC. “Before he came to West Ham, a couple of the assistant coaches and a couple of the players were like ‘what’s he like? Good player?’.

“I just said ‘wait till he comes and then you will see (how good he is)’. I think in the first session the lads were just blown away by how good he was.

“Technically so good. He picks up so many good spaces for the midfielder to pass into and without him at West Ham then I don’t know where we would be.”

It would now be a surprise if he was omitted from Gareth Southgate’s plans this summer.

On top of that, his form has been so impressive there could be a chance that he will return to Old Trafford next season. I would be surprised if West Ham didn’t look to make the deal a permanent one, so it will be interesting to see who Lingard decides to do with his future.

The main thing is that he’s enjoying himself again.