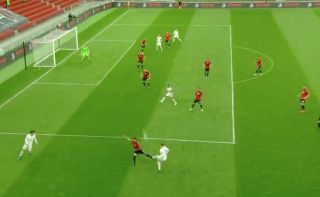 Luke Shaw is in the form of his life.

Shaw sent a sublime cross into the box, with Kane winning the ball in the air and sending his headed effort into the back of the net.

Footage of the goal courtesy of ESPN – the match is also being televised on ITV, with Roy Keane offering analysis.

Harry Kane opens the scoring for England, what a cross from Luke Shaw 🔥 pic.twitter.com/8z2evF96ud

England have asked questions of Albania defensively, but one must ask why Gareth Southgate feels the need to play two defensive midfielders — Kalvin Phillips and Declan Rice — in a qualifier against a weak side? It’s not as if England haven’t the quality to really go at these teams.

However, it doesn’t matter when you’ve got a left-back in form like Shaw, who is now making more things happen in the final third with his bullish runs into dangerous territory.

England should stay on the front foot in the second half.