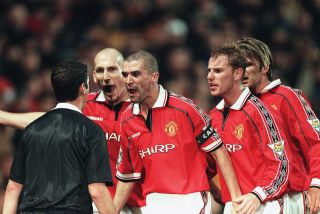 We could see two former Manchester United midfielders in the Celtic dugout next season in a bid to take the SPL title back from Rangers where Steven Gerrard has just delivered success.

Roy Keane is reportedly on the short-list to replace Neil Lennon and has held talks with the Parkhead hierarchy, as per The Sun. The report includes other names such as Scotland manager Steve Clarke, Red Bull Salzburg chief Jesse Marsch and Chris Wilder, recently sacked by Sheffield United.

The Irishman could be joined by Nicky Butt, 46, who made a shock exit from United last week. The Athletic claims Butt did not take kindly to John Murtough’s appointment as football director, a role he wanted to take up if given the chance.

Butt told the club’s official website: “Having come through the Academy myself to play almost 400 games for Manchester United, it has been an absolute privilege to come back and work with a new generation of talent making that same journey.

“I already know from my playing days how difficult it is to leave Manchester United.

“But it feels like the right moment for a new professional challenge.

“I look forward to exploring the opportunities that build on the great experiences I’ve had here over the past nine years.”

Butt could find himself with plenty of options now that Salford City are looking for a new manager and a move to link up with Wayne Rooney could also be on the cards.

On top of that, we shouldn’t forget Butt’s links to David Beckham and the new Inter Miami franchise.

Do you think the former United duo would do a good job at Celtic?