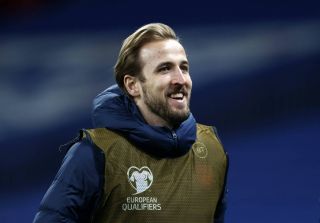 Harry Kane has said he will not make any decisions on his future before the end of the European Championships this summer.

The Tottenham striker admits that he does not currently know whether he has a future with the Premier League outfit amid reports he could move for pastures new in the coming months.

Kane, 27, has been one of the Premier League’s best strikers for years but has never been lucky enough to win a trophy in his professional career.

There has always been speculation over the England captain and with United potentially looking to address their problems up front this summer, it wouldn’t be a wild shout to suggest they might move for Kane.

What did Harry Kane say?

“I think that’s a hard question to answer right now,” Kane told reporters when asked if he had to leave Tottenham in order to win trophies, as quoted by Goal.

“It’s important that all my focus is on the two England games coming up now and the rest of the season with Spurs and then the Euros.

“To be thinking about speculation or rumours would be damaging in terms of my own performance.

“I always like to be focused on one goal and one job and that’s to finish strong with Spurs, win these qualifiers with England and hopefully go on and have a great Euros.

“Look, I try to stay out of that speculation as much as possible. I’m fully focused on doing the job on the pitch from now until the end of the summer and then we’ll see where we go from there.”

I would take Kane in a heartbeat this summer and we would definitely help us bridge the gap in the Premier League.

He joined Spurs as an 11-year-old and has scored 215 goals in 327 appearances in all competitions. That puts him one place behind Jimmy Greaves in Tottenham’s highest scorer charts.

A significant improvement on Anthony Martial which is something I’m sure Jose Mourinho can agree on.