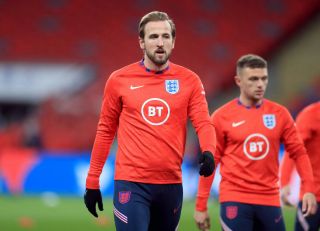 Jarmain Defore has urged Harry Kane to leave Tottenham if he wants to win trophies.

Kane, who has scored 216 goals for Spurs despite never winning a trophy, will look to change that next month when Tottenham take on Man City in the Carabao Cup final.

But League Cups are not going to keep him at White Heart Lane.

If Kane is to leave Spurs for trophies, he will want to be competing for league titles and the Champions League. Like a goalscorer of his ability should.

United have that ambition with players like Bruno Fernandes and Marcus Rashford already in attack, with a right winger still required to add balance to the team’s attack.

Defoe only won one trophy during three spells at Tottenham, which was the League Cup in 2008, but this season he experienced winning the SPL with Rangers. A top-flight title is not something he would have expected in the latter stages of his career.

‘If you’d have asked me this question a few years ago, I’d have said he should have stayed there, what he’s done at the football club – he’s a legend,’ the former Tottenham striker told talkSPORT.

‘Since I’ve come away from that and gone to Rangers, I’ve seen that mentality and played for another big club, the importance of playing for that club and winning every game, that mentality, the standards and demands.

‘You have to win and bring silverware, otherwise it’s not good enough. When you actually achieve that and the feeling you get from that, wow man. I wish I had that earlier on in my career.

‘If Harry Kane wants that and wants to win trophies then it looks like he has to go.

‘I don’t think it will be easy for him to leave and he might be looking at it and want to finish off being the highest scorer in the club’s history and see where that takes him.

‘He can hopefully win a few trophies, but if he’s really craving medals then he really has to go.’

Although United are not yet winning trophies, I think signing Kane would give us a massive boost in doing so and he’d be joining the biggest club in the world.

The striker has already said he will not make a decision on his future until after the European Championships this summer.