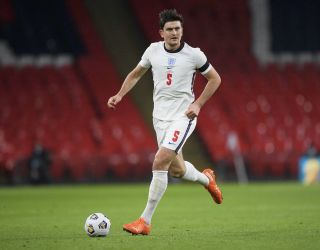 Harry Maguire has opened up on his relationship with John Stones, who he plays alongside for England.

The Manchester United defender revealed that he is close with England team-mate John Stones despite the club rivalry between the pair.

Maguire and Stones played at centre-back throughout the 2018 World Cup in Russia, and look set to be Gareth Southgate’s defensive partnership again at this summer’s European Championships.

Both defenders have been able to put the rivalry between their clubs to one side at international level, with Maguire calling Stones a “good friend”.

Speaking at a press conference ahead of England’s World Cup qualifying match with Albania on Sunday, Maguire made it clear he is delighted to see the 28-year-old bounce back to his best.

“We always speak away from football,” Maguire said, as quoted by Goal. “He’s a good friend. I grew up with him, I grew up playing against him when he was at Barnsley.

“You’re not going to go throughout your career without being at fault for goals, so you get scrutinised when you play in the Premier League so you expect that.

“It’s about how strong you are mentally and how you can come through it. I’m pleased to see John. He’s back playing and back playing with confidence, back playing really well. For myself, I feel exactly the same.”

Maguire added that they also support one another off the pitch.

“We spoke to each other through times where it’s tough. We spoke when it was tough and we speak when it’s going well. Like I say, I’m close with John. I want him to play as well as you can without winning football matches, if possible!”

I don’t mind players having tight bonds as long as they perform for United.

It irked me a little when Maguire was spotted hugging Stones after a derby earlier this season, but the atmosphere was very different being played in an empty stadium.

I don’t think that would have been accepted during a normal derby against City.