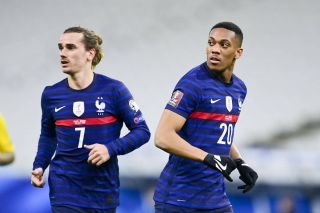 We are keeping a close eye on the World Cup Qualification matches to see how the Manchester United lads are getting on. In an early kick-off (2pm), France take on Kazakhstan with both Anthony Martial and Paul Pogba named in the starting line-up.

Usually we would be fretting over players getting injured on international duty but these two need games. Didier Deschamps said as much about Pogba this week, but I’m actually surprised to see Martial get the nod after his club form this season.

France are seeking their first win in Group D of the World Cup qualifiers and will be keen to bounce back after a disappointing draw against Ukraine. Antoine Griezmann opened the scoring early in the first half but Presnel Kimpembe put the ball in his own net after the interval to earn the Ukrainians a draw.

They will be hoping for a better result tonight and certainly have the players to put the sword to Kazakhstan.