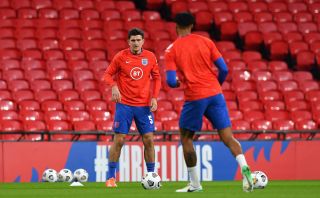 Gareth Southgate has named two Manchester United players in his starting line-up, with Harry Maguire and Luke Shaw both featuring in defence.

Dean Henderson is also on the bench with Southgate preferring Nike Pope between the sticks again.

It’s a great opportunity for Shaw to start after being recalled to the national team squad. He thoroughly deserves it too, with most football fans in agreement that he’s been the best left-back in the Premier League this season.

England are expected to win the game but we’ll keep an eye out for footage of the United lads.

Here's how the #ThreeLions line up for today's #WCQ against Albania! pic.twitter.com/8b6qs9mF5c