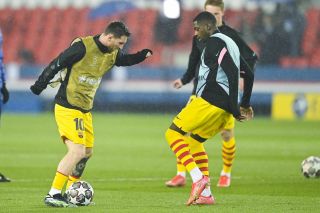 Barcelona are reportedly set to hold talks over a new contract for Ousmane Dembele in the coming days.

That is according to reliable Italian football journalist Fabrizio Romano, in his Benchwarmers column, with new Barcelona president Joan Laporta being an admirer of the French winger.

Romano states that Barcelona will soon start talks over a new deal for Dembele, but they may be forced into a sale if the player decides against committing his future to the club.

However, Romano also states that United were in for Dembele last summer, as were our rivals Liverpool.

Barcelona are a complete mess right now but United also have a lot to prove in order to become a title challenging outfit again. That must be the ultimate objective for the management.

Let us know in the comments section if you think Dembele is the right buy for United?