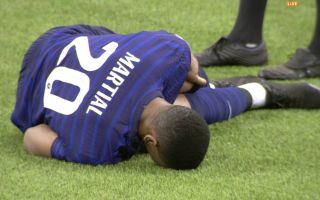 Anthony Martial was replaced in the second half of France’s 2-0 win over Kazakhstan.

It’s been reported as a suspected knee injury on the official Manchester United website, but after watching the game I thought Martial walked off the pitch just fine… so long as your name isn’t Kylian Mbappe, who he did not look too pleased to see, as per Caught Offside.

Martial took a knock and went down minutes before being substituted and it didn’t look like he was injured. He started alongside Paul Pogba during the World Cup qualifier in Nur-Sultan, with the forward producing a superb assist for Barcelona winger Ousmane Dembele.

Our no.9 picked the ball up midway inside the opposition half after a pass from Pogba and pirouetted round a defender. Martial went on to glide and lay the ball off for Dembele, as seen below, courtesy of Sky Sports:

We don’t want any of our players returning injured from the international break.

P.S. After going down holding his knee, Martial took a brilliant free-kick and didn’t seem hurt.